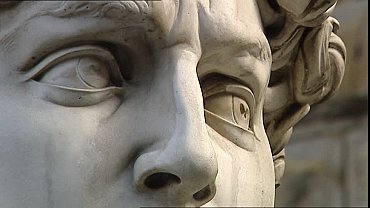 Symbol of Florence and work of extraordinary beauty, Michelangelo's David, housed in the Accademia Gallery, is one of the most famous and admired sculpure in the world. Many original stories circulate around it, one in particular, that we are going to tell you today, concerns his pretty nose.

It was about 1504 and the young Michelangelo Buonarroti was to complete his masterpiece, a marble sculpture more than 4 meters high representing David, the biblical hero who defeated the giant Goliath with a sling, freeing Israel from the Philistines.The statue was to represent Florence and become its symbol and then, before it was exposed, the gonfalonier of the Republic, Piero Soderini, decided to visit Michelangelo, check his job and take a look at the statue.

On that occasion Soderini could not just refrain from making a critical remark: David's nose seemed a bit too big, but if the sculptor had tried to reduce it a bit surely the entire work would have been more beautiful and harmonious. In short, he dismounted none other than Michelangelo.

Michelangelo is known, as well as for his skill, also for his temper, but in that particular circumstance he was able to be diplomatic. He then approached the statue to follow the directions of Soderini and make the nose smaller. Before stepping on the ladder, however, along with the chisel, he picked up from the ground a handful of dust and marble pieces. He climbed the ladder and acted as chiselling the nose, throwing down the dust collected. So he turned to Soderini asking if the nose had at that point a more proportionate size.The gonfalonier said yes and took for himself the credit of having perfected the already perfect David.