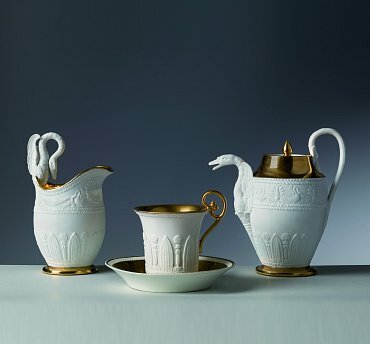 From March 19 to June 23 at the Museo degli Argenti the exhibition “Luxury and Elegance. French porcelain at court and the Ginori manufactory” celebrates the 40th anniversary of the inauguration of the Museo delle Porcellane in Palazzo Pitti. This is the opportunity to highlight the extraordinary collection of Palazzo Pitti and, at the same time, also the Doccia Manufactory’s production during the Napoleonic occupation and the restoration of the House of Lorraine. In this way the exhibition also celebrates the splendor of the Ginori Manufactory, the luxury porcelain brand that, after 250 years, has recently closed its activity.

The wave of changes that the Napoleon’s empire brought in Tuscany influenced also the artistic production under the Kingdom of Etruria with Louise de Bourbon Parma and under Elisa Baciocchi, princess of Lucca and Piombino before, and grand duchess of Tuscany later, as well as Napoleon’s sister. She succeeded in recreating a brand new aura of interest around the arts that unfortunately had been relegated to a secondary role at the time. So, in a new impulse for patronage, she allowed the flow of various artists, from sculptors to painters and musicians, in Florence. Furthermore, at the same time, she supported the artisan industries of Tuscany promoting thus the production of silk, porcelain and furniture.

It was really a great period for the artistic production and an important role was played by the Doccia Manufactory, where the Ginori Porcelain was produced, gathering interesting influences from France both in formal and decorative aspects. Under the guidance of Carlo Leopoldo Ginori Lisci the manufactory introduced significant technical and stylistic innovations. The French influence didn’t end here, and continued with the return in Florence of Ferdinand III of Habsburg-Lorraine, after his exile in Würzburg, who added the porcelain from Sévres donated by Napoleon Bonaparte to the grand ducal collections.

This was a further incentive for the Ginori Manufactory, that took inspiration from the French models and developed its production also thanks to the continuous exchange with French manufacturers, and in particular with Sévres. A further improvement was reached with the work of French artists like Jean David, Joseph de Germain and Abraham Brongniart, who reproduced on porcelain the old masters in Florence’s galleries and trained the manufactory’s young painters.

This exhibition puts together about 120 works, mostly from the collections in Palazzo Pitti and from the Doccia Manufactory’s Museo Richard Ginori, but also other works from Italian and French museums and from private collections. Furthermore the visitor will be able to explore also documents from the archives of the Court Lorraine, from the Museo di Doccia and from the Ginori Lisci archives that show the Ginori Manufactory’s production and sales in the first thirty years of the 19th century. Finally, the exhibition also underlines the collaboration with the Musée Nationale de Céramique de Sèvres, and the work of the painter Abraham Constantin, who worked for Sèvres but was sent to Florence to copy on porcelain the most famous paintings of the Florentine Galleries.