Verrocchio and the mid XV century sculpture at the Bargello Museum

Verrocchio and the mid XV century sculpture at the Bargello Museum 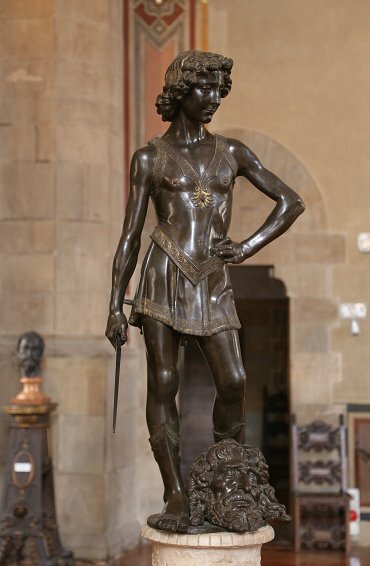 The Hall of Verrocchio and the mid XV century sculpture at the Bargello Museum hosts sculpture mostly coming from the Uffizi Gallery, the Medici and Lorraine collections among which stands out the bronze David by Verrocchio (1470).

As the whole building, in 1574 the hall was used as a prison. Subsequently it was restored in 1865 and decorated by Gaetano White with coats of arms of some Florentine families.

Among the works on display, all attributable to the second half of the XV century, the are important works by Andrea di Michele di Cione, better known as Verrocchio. In the hall we find his first sculptural work, the bust of the banker Francesco Sassetti, carved between 1464 and 1465, an early work but with well-shaped forms, and characterize by the sharp incisiveness and the elegance and austerity that will distinguish his mature works.

The most important and famous work by Verrocchio is the bronze David made around 1472-75 for the Medici and sold to the Signoria to be placed at the entrance of the Sala dei Gigli in the Palazzo Vecchio. The statue differs from the classic model made by Donatello for his profound realism, which harmonizes the biblical hero pride with an elegant shape and an extreme attention to details.

Yet we can see the portrait by Verrocchio of Lady with the bouquet, which reveals the artist's virtuosity in the subtle ripples of her dress, the curled hair, the flower bouquet and in the noble and stern face shape. There is also a polychrome relief in terracotta depicting the Resurrection of Christ, found broken at the beginning of the XX century in a Medici villa and restored for the Bargello in 1930. Always of the same period there is a wooden crucifix, masterpiece of painting as well as of sculpture in which we can see the extreme care that the master used for the pictorial finishing.

Around Verrocchio's works there are works by some of the greatest sculptors of the period. Among these numerous busts of famous Renaissance personalities: the marble bust of Niccolò Machiavelli and the terracotta depicting a Man with the armor, both attributed to Antonio del Pollaiolo, the bust of Giovanni de' Medici, and that of Piero the Gouty, Lorenzo de' Medici's father, sculpted by Mino da Fiesole, the bust portrait of Battista Sforza by Francesco Laurana and that of Pietro Mellini by Benedetto da Maiano. In addition there are also important works, both statues and reliefs by Antonio Rossellino.