Frida Kahlo for the first time in Rome

Frida Kahlo for the first time in Rome 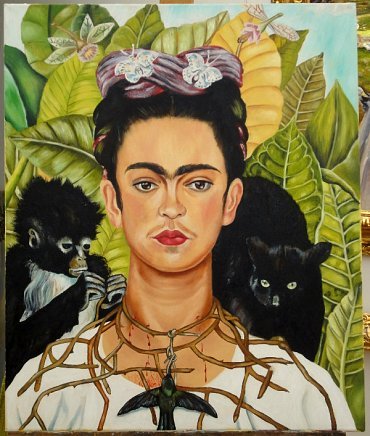 For the first time Italy dedicates an exhibition to the Mexican artist Frida Kahlo. The Quirinal Stables in Rome host in fact, until August 31, 167 works, including paintings and drawings that cover the entire career of the painter, starting from her relationship with the cultural and artistic movements of the time. Among the masterpieces in the show - from Mexico, Europe and the United States - there are over 40 portraits and self-portraits, including the famous Self-Portrait with Necklace of Thorns (1940), which has never before been exhibited in Italy and the Self-Portrait with velvet dress of 1926 painted when we was just 19 years old for the beloved Alejandro Gomez Arias. Exhibited in Rome there are also some photographic portraits, especially those made by Nickolas Muray, Frida's lover for 10 years, among them Frida on White Bench, that later became a famous cover of Vogue. The project is completed by a selection of drawings, among which the pencil sketch for the painting Henry Ford Hospital and the famous corset that held Frida prisoner after the accident.

The main theme of the exhibition is the self-representation of Frida through the languages of various ages, which shows the important meaning that the artist had in the transmission of psychological, cultural and iconographic values. Her paintings are in fact not only the mirror of his life - marked by the accident in which she was involved at 17 years that drastically changed her life - but also of social and cultural transformations that led to the Revolution and followed it.

Frida Kahlo interpreted the indigenous past and the folk traditions of his culture by fusing self-expression with the imagery and colors of Mexican popular culture. The study of her work thus makes it possible to understand the interplay of cultural movements that crossed Mexico in that period: from revolutionary Pauperism, to the Stridentism, from Surrealism to Magic Realism.

Alongside the works of Frida Kahlo there are also works by other artists of that period who have lived near Frida, both artistically and physically, first of all her husband Diego Rivera, but also José Clemente Orozco, José David Alfaro Siqueiros, Mary Izquierdo and others.

The myth that has formed around the character of Frida Kahlo is global, and it is also clear why. Undisputed icon of Mexican culture of the twentieth century, forerunner of the feminist movement and also alluring subject of Hollywood cinema, the artist has unquestionably huge hints and reasons of fascination.