Michelangelo's David all over the world

Michelangelo's David all over the world 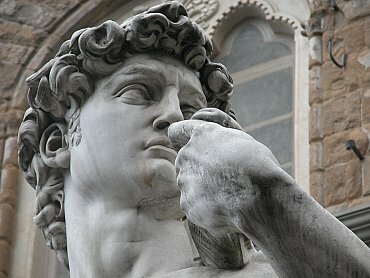 With his 4 meters and 10 cm, Michelangelo's David is considered almost unanimously the synthesis of perfection and beauty. The original statue is hosted in the Galleria dell'Accademia in Florence, but the famous Renaissance statue has a large number of copies. Two of them are located right in Florence: a marble statue, in Piazza della Signoria, in front of Palazzo Vecchio, and a bronze one in the middle of the Piazzale Michelangelo, waking the entire city.

But David is the most replicated and photographed sculpture in art history and his copies do not end here, they are scattered a bit anywhere among the five continents.

In Europe, a copy is kept at the Victoria & Albert Museum in London. It is a sculpture made of plaster in 1850 by Clemente Papi and intended for art students training. In the old continent, then we find a copy at the Middelheim Open Air Sculpture Museum in Antwerp and one on the Langelinie Promenade in Copenhagen.

In the United States there are dozen of copies. Americans are among the strongest supporters of David, and took him in the most unexpected places. In Forest Lawn cemetery, for example, near Los Angeles, where Michael Jackson is buried and where there is a 1:1 copy made of Carrara marble arrived specially from the Apuan Alps. And then, what about Las Vegas? The entire city is a copy of something, and naturally we can find also a copy of the Michelangelo's David, in the super casino Caesar's Palace. And yet, there's a full-size replica in Fawik Park in Sioux Falls in South Dakota and in Delaware Park in Buffalo, New York. Two more copies are located in Florida, a bronze statue at the John and Mable Ringling Museum of Art in Sarasota and the second, in marble, at the Ripley's Believe It or Not!Museum. Another David is in Philadelphia, at the Pennsylvania Academy of the Fine Arts. In the suburbs of Los Angeles a resident of Hancock Park wanted even 23 copies to decorate his garden. While at California State University in Fullerton, the students touch his bottom - remained miraculously intact after the 1987 earthquake that reduced the statue to pieces - for good luck.

Other copies of the David can be found in Australia, the Surfers Paradise in Queensland and in India, at the University of Pune.

In Ningbo, the Chinese city in the province of Zhejiang, a bronze copy was donated with an official ceremony by the City of Florence. The life-size statue, weighing 1,500 kg has been placed in a new square dedicated to Michelangelo Buonarroti. The statue was donated to the city in exchange of the two colossal statues (copies of two very ancient originals) located in Florence inside the Villa Vogel park.

In Jerusalem David was not well accepted. In fact, in 1994 a copy offered to commemorate by David 3,000 years from the conquest of the city was turned down because the image of the nude was considered "pornographic". The Florentines were thus forced to change the present and offer a more chaste version of Verrocchio.